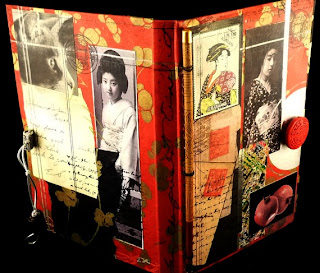 Finished a new cover this morning that really pleased me. I noticed as I was finishing it that the front cover was a bit narrower than the back. I thought that I might have to rebuild it, but then put a strip along the inside of the front cover that looks really good, design wise-and function-wise! Necessitity is sometimes the mother of artistic invention. 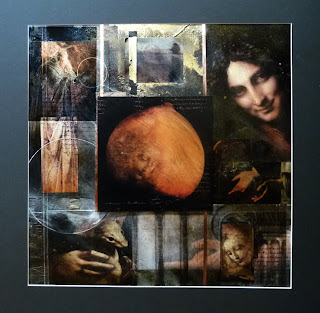 Finished a new piece today – I worked with a square canvas to see how it felt. It was a bit difficult to work with the symmetry, but once I divided it up into a grid, it was more comfortable. There are parts of it that I like very much and other parts I wish I’d done differently – well, what else it new?
“Encanto” means a charm or a spell – the lady in the gourd did it, of course. 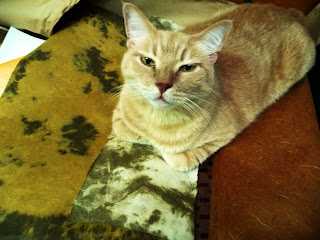 I went back to put the new paper away, but Max has already claimed it: 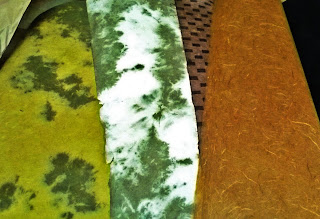 I found a nice new (to me) online source for unusual paper called Mulberry Paper and More. They are out of Parker, Colorado near Denver. They have a great selection and very good prices. The Unyru Mulberry, for example is $2.41 for a 25×37″ sheet, and it’s lovely and silky but sturdy. Lots of colors, too. Of course I got black and Terra Cotta – how predictable, Lyn! They were out of one paper so waited a day or two till it came in before shipping, but checked with me before they did that. I will order from them again, for sure. Here’s their website: 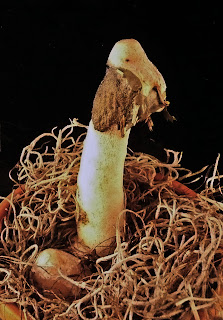 Ahem. I was given an interesting fungus today. It’s called Phallus Impudicus. For real. It’s also called “stinkhorn.” Want to know more? Mushroom expert Dr. Michael Kuo says, “Stinkhorns are astonishing. Their abrupt appearance in gardens and lawns is frequently the cause of considerable consternation; they arise from an “egg” that results from the immature mushroom’s universal veil, quickly breaking the “shell” and thrusting themselves up to heights of nearly 10 inches in a matter of hours! . . . Phallus impudicus covers its tip with a foul smelling and spore-laden slime; flies are attracted to it, and carry the spores away as they continue on their little fly adventures.”

Charles Darwin’s granddaughter Etty “so despised stinkhorns that she mounted an antifungal jihad with the aid of gloves and a pointed stick,” burning the stinkhorns in secret to protect “the purity of thought among her female servants.”

It’s kind of an appropriate Valentine’s gift – now I just have to figure out a good way of working the photos of my Phallus Impudicus into a collage . . .

If imitation is the sincerest form of flattery, I guess I’m flattered – I came across a site on Etsy this morning that looks somewhat familiar 🙂
The construciton and even the presentation is a lot like mine – it’s a good lesson in what is and what is not one’s own intellectual property, but I have no problem with sharing my ideas with other artists. Good luck to “Craftycovers” and may you have as much fun with your Kindle covers as I have with mine. 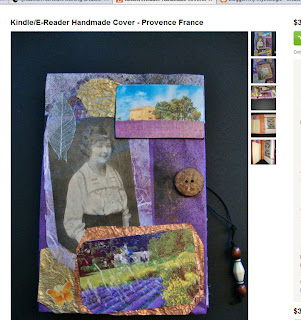 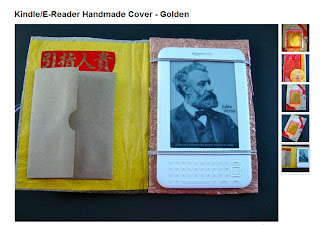 It’s always a little risky to step out from what’s already working, but I just finished two new collages with an Asian influence and a different, softer palette than the previous Renaissance-themed work. I liked the idea of using Noh masks as a central motif – I’m still using my altered fruit photos, and they still seems to work. So far, so good – would like some fresh new work for the April show at La Vida. This feels like a good direction right now, or maybe it’s because I’m just ready for spring after all this unusually cold weather!

I have LABS (lazy artist blogger syndrome) – no entries for several weeks – but the good part is, I’ve been working – a lot! Custom Kindle cover requests are coming in and I’ve sold over 70 covers since my Etsy shop opened in August. It’s wonderful, lots of experimenting and learning – speaking of learning . . .one of the things I discovered after getting back into collage after so long away is the slew of new products available, mostly thanks to the scrapbookers out there.
I was watching a collage video on You Tube and the demonstrator kept talking about Soft Get for adhering paper – what’s that?? I found some at Michael’s and tried it – great stuff! It works beautifully for delicate papers such as joss and tea papers. Here’s a pic of one of the latest covers with joss paper accents: 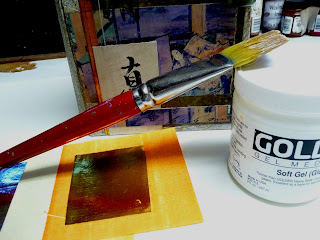 It also makes a good over-coating because it’s quite flexible and transparent.
Another news flash – it snowed in San Antonio this morning. Trinity University is closed, so I get to spend the day in the studio – yay! Here’s a view out the studio doors – poor Prius. 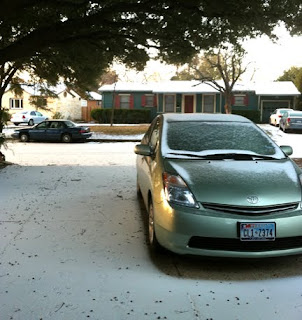