So the big Fiesta Show and Sale is day after tomorrow – I’m sorta ready, but this morning I really wanted to work on something new for the show. I started with some square black frames that I had ordered just because they were on sale. Then I printed some digital photos of gravestone angels (but of course!) and started working on two small collages that remind me of the Guardian series. I call the new series El Ala y la Oración (the Wing and the Prayer) because they feature bird feathers and monument faces. They are turning out so well – it’s great to feel them come together. Here are the first two – with any luck I’ll finish four more by Sunday. These are behind glass so there is a bit of reflection in the photo, but it adds to the overall effect, perhaps. The hardest part was figuring out how to create the shadow box. I did it with thin strips of black foamcore mounted against the inside edges of the frames – come by the Studio on Sunday and I’ll show you the trick! 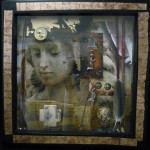 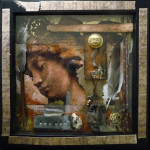