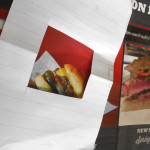 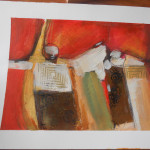 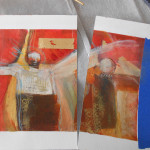 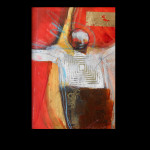 Sorry,  I’m probably “over-blogging” from Boston, but rarely do I have such a stretch of time to experiment with art and write about the weirdness of the process. For example, my Taos teacher Gwen Fox always says, “Start with a thumbnail from an existing picture.” So I found this hamburger in a magazine (fig. 1) – it looked interesting through the paper window (or maybe I was hungry). I turned it sideways and sketched in the shapes which started morphing into abstract figures. (fig.2). I tried to make the two figures balance and relate, but it became obvious that the figure on the left was dominant, so . . .whack! Off went the second figure to be used elsewhere. (fig. 3) I put a very few finishing tweaks on the left figure and, when matted, it is intriguing and colorful. (fig. 4). I think I will name it “McDonald.” Or maybe “Hunger and Evolution.” Isn’t art fun??