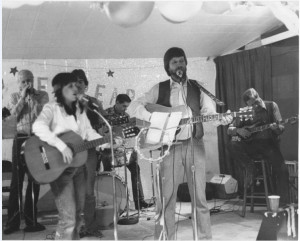 The Medina Mud Band in the early days

The Medina Mud Band said goodbye to the Quihi Dance Hall Saturday night, and to the many benefit gigs we’ve played there for Inner City Development. So many friends turned out despite the stormy weather – and the biggest surprise came from Patti and Rod Radle, Inner City’s founders and executive directors, who announced that they had established the Medina Mud Band Cultural Arts Fund for the children at their West Side community center. So the band lives on in a fine legacy – what an honor! 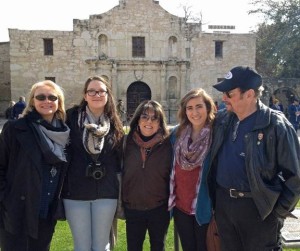 One of the coolest things about the event was meeting my cousins from Louisiana, who drove to Texas for the gig. My cousin Skip has been here before, but I got to meet his daughter and her children in person! We had the best time. The girls wanted to go to the Wax Museum on Alamo Plaza. I have to say that it is one of the weirdest places I’ve ever visited. Many of the life-sized statues were creepily real, while others looked kind of goofy. Here’s a gen-yoo-wine photo of me and Barack Obama – which is wax and which is real?? 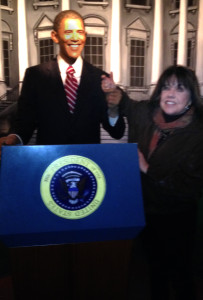 OK, now I’ll bet you are saying, “Gee, I wish I knew how to make a blog so I could put up pictures of touristy wax figures on the Internet.” Help is here – actually, I just remembered that I made some tutorials for my Trinity students on how to make a blog using Blogger. It’s free (all you need is a Google account), and it’s fun. These tutorials should be fairly easy to follow if you want to try it – nobody says you have to keep it.

The only thing you’ll have to remember is that in the first video, I tell the students how to access Blogger through their university account. You’ll just go directly to blogger.com and take it from there. There are also lots of helpful videos on You Tube as well, and a good help menu on the Blogger site. On your mark, get set – BLOG!

1 thought on “Goodbyes, hellos, and how to start a blog”