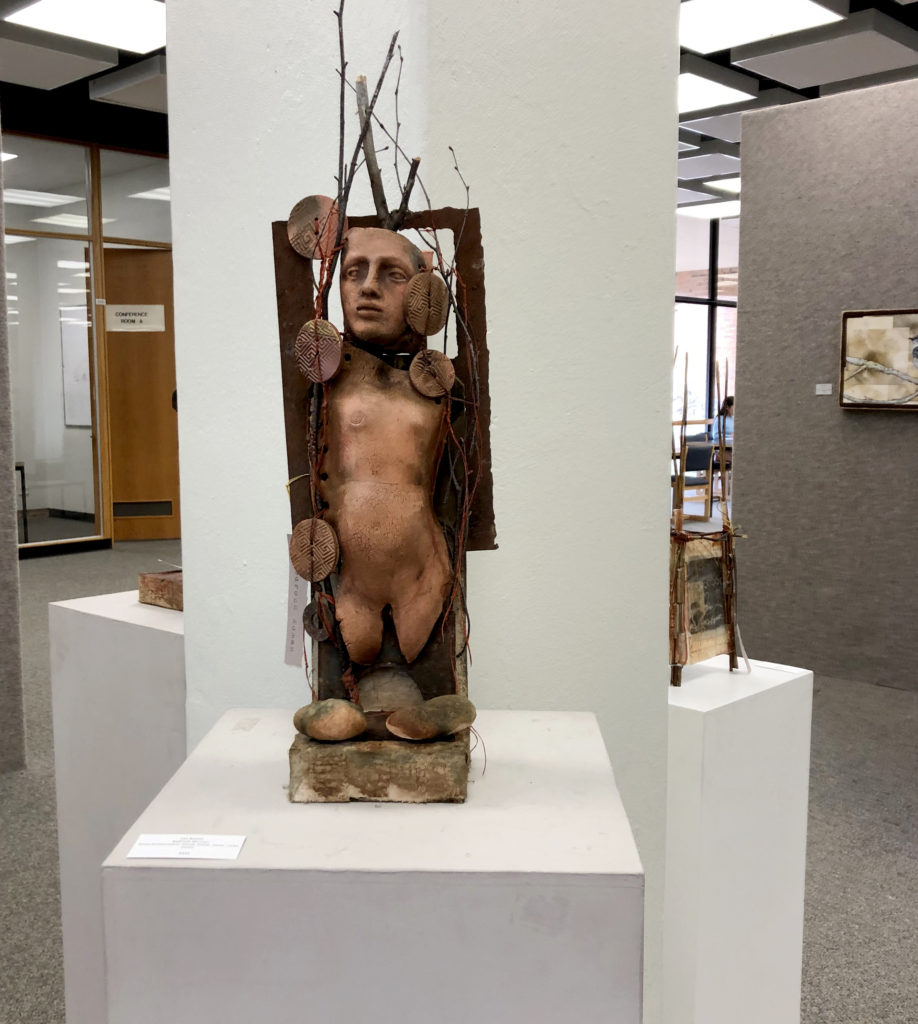 Brian, a huge talented painter and professor of art at St. Mary’s,  treated me to lunch yesterday and a tour of the exhibit – wow! The works by (lucky) me and the other three artists integrates beautifully. Read Brian’s statement to see how all of this came about: 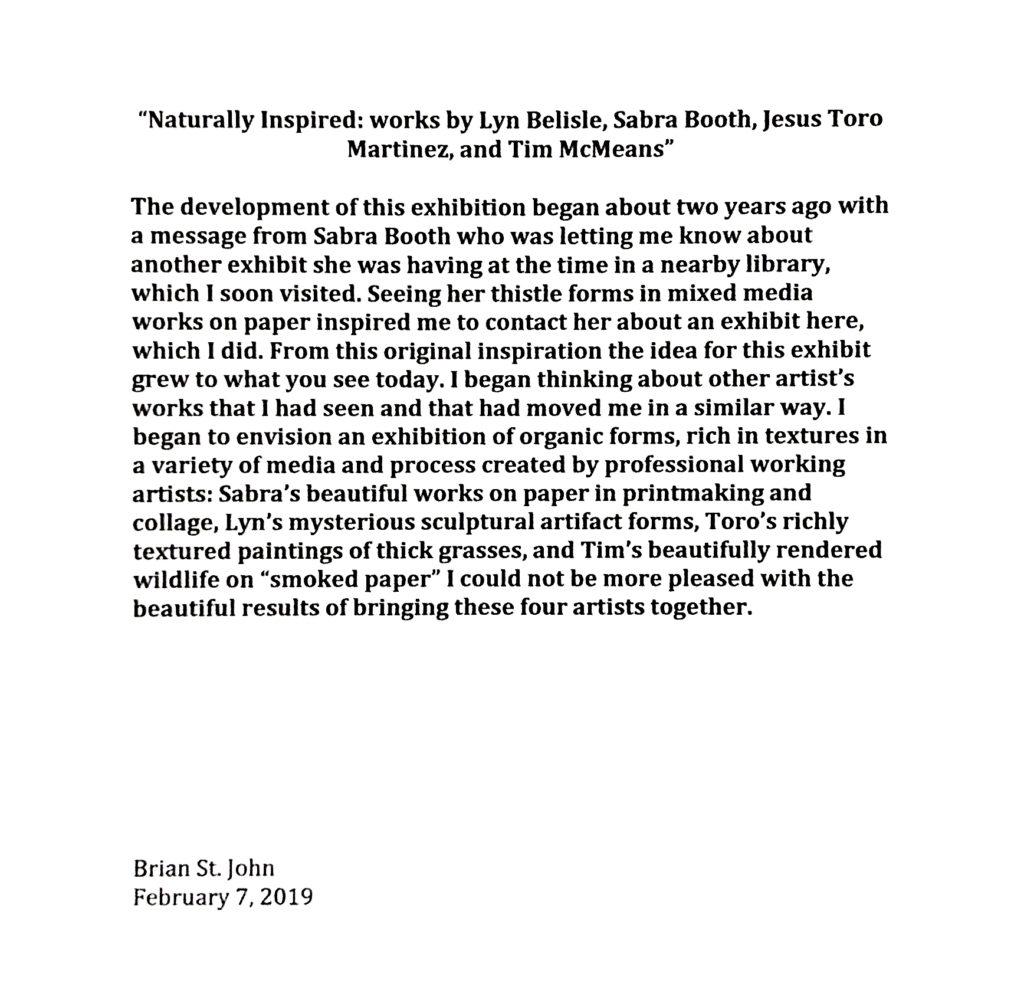 I knew Tim McMeans’ work well and had admired it for some time. His hybrid painted-drawings of two dimensional figures in broken geometric planes were recently featured in a great show at the Felder Gallery. 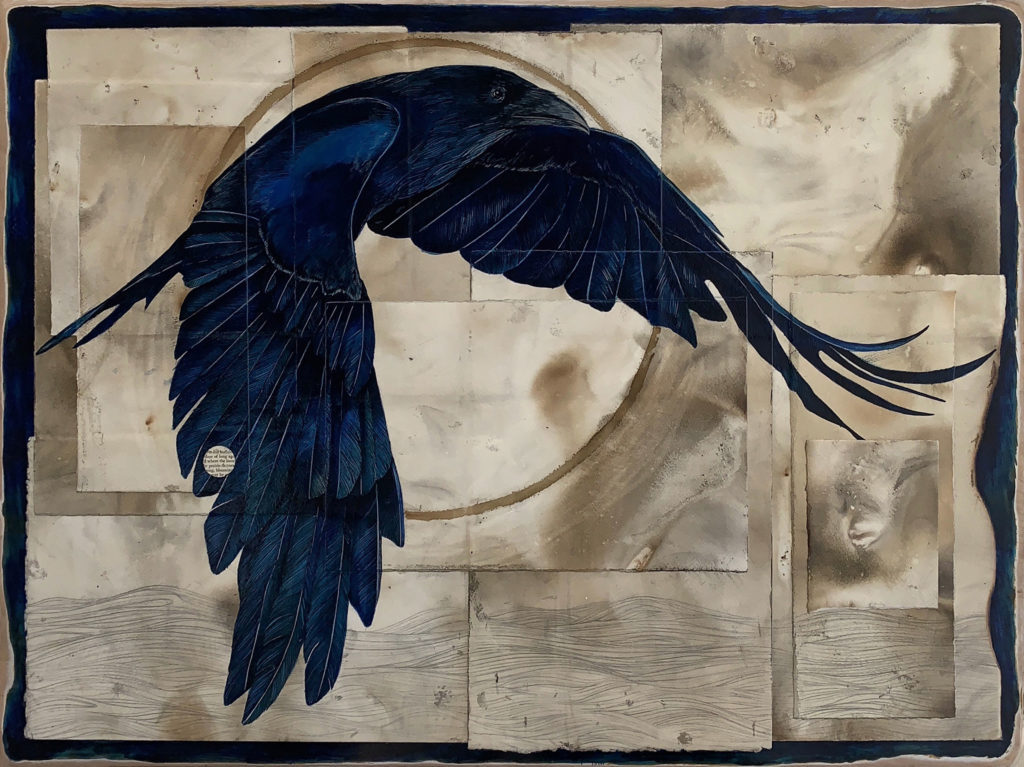 Jesus Toro Martinez is also a well-know San Antonio painter whose work I knew for its textures and power depicting earth themes. We had met a couple of times, and I loved his outgoing generous nature.

Sabra Booth was new to me, but no longer – she is amazing. Her organize prints and collographs are stunning. In the exhibition, she has one huge collagraphic printing plate displayed next to the framed print it produced. I am a new fan of her work! 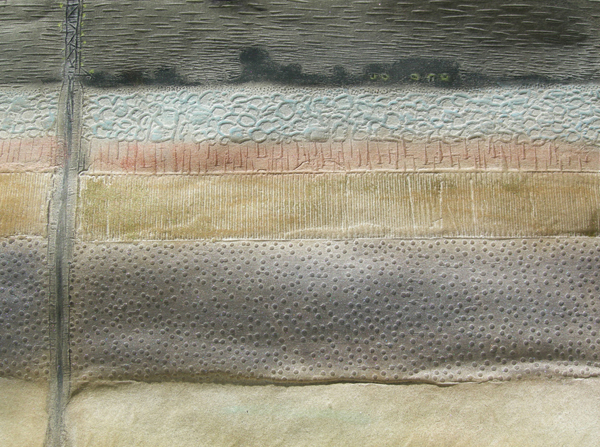 I took some photographs of the exhibit when I was there with Brian yesterday – want to see? Just click on the image below! 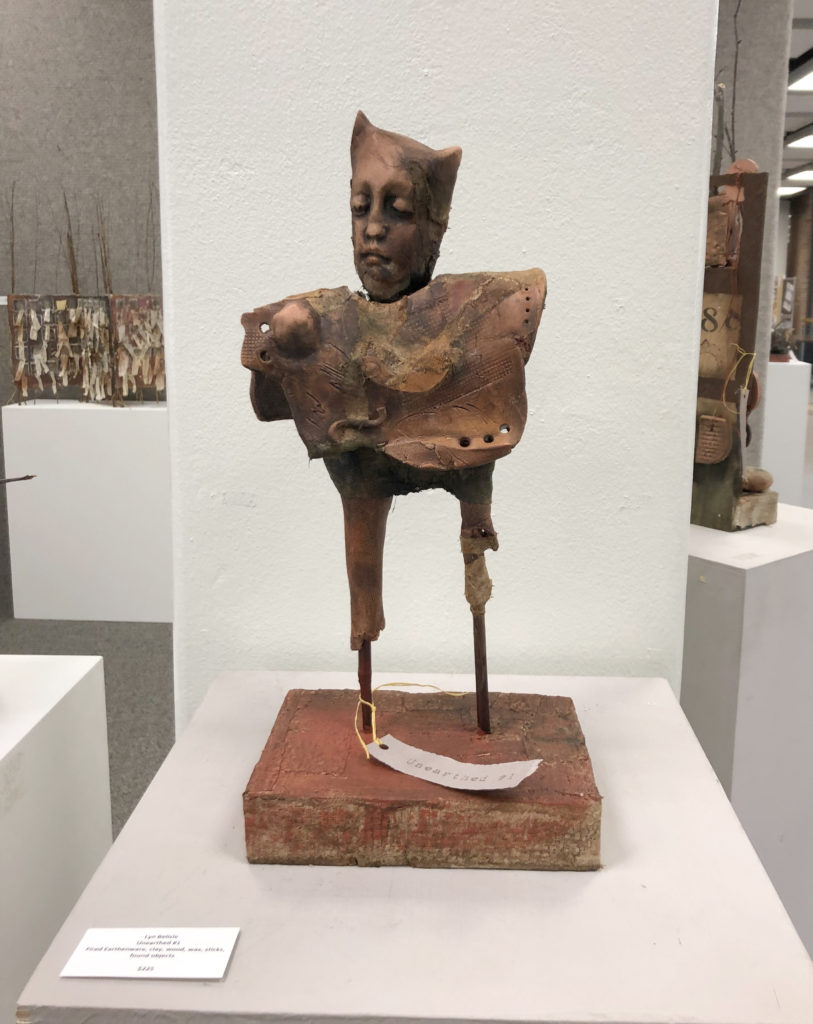 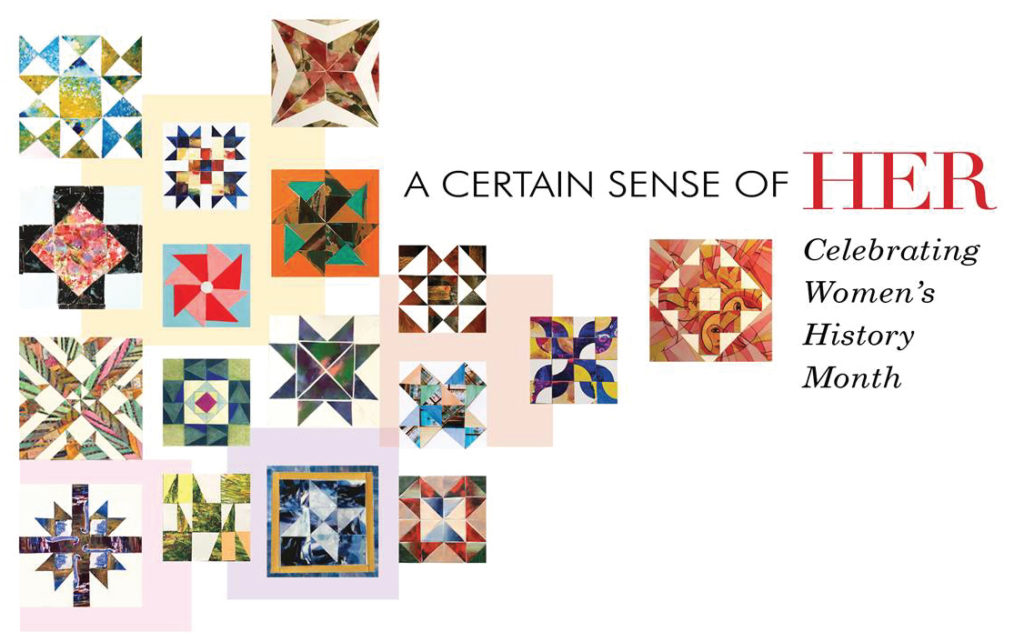 Individual artists first create a maquette (scaled study) of a painting that might be cut into quilt squares – here’s mine, with notes, which was completed several months ago: 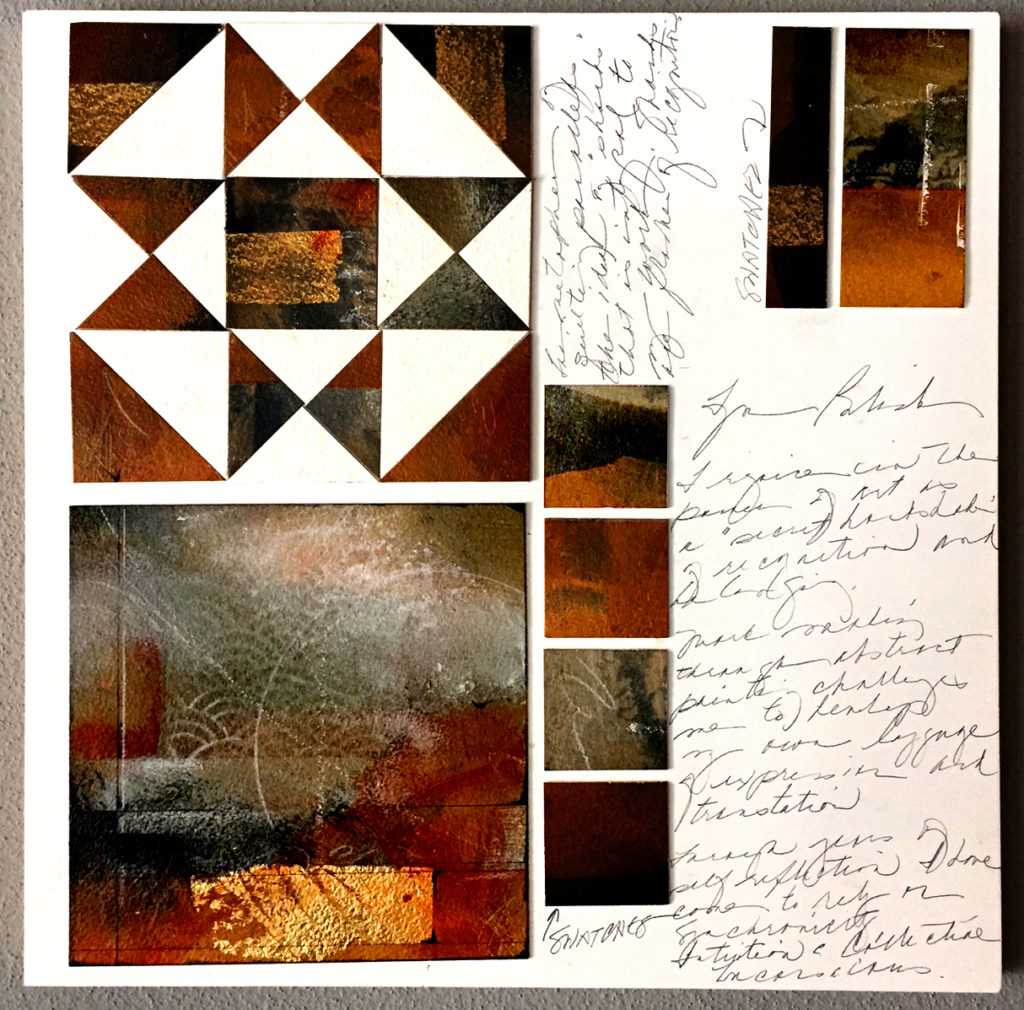 This was the small sketch for the larger painting in close-up – it was just a general idea that I hoped to develop somehow — in my notes on the maquette, I wrote, “I have come to rely on synchronicity, intuition, and collective unconscious” – in other words, I try to trust the process and the concept will emerge. 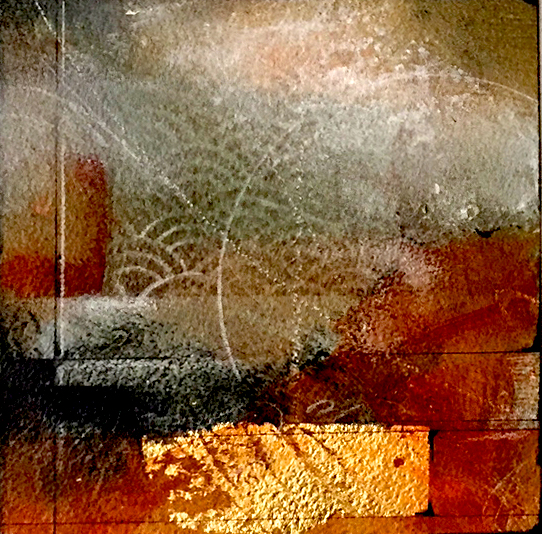 The next step was to create the painting itself, a 20×20″ work on unstretched heavy canvas with six coats of Gesso. One of Sylvia’s brilliant ideas was to use a separate canvas for the palette, which could them be cut up into a quilt design that would reflect the colors in the painting.

Working from my initial composition, I started the painting, laying our blocks and texture: 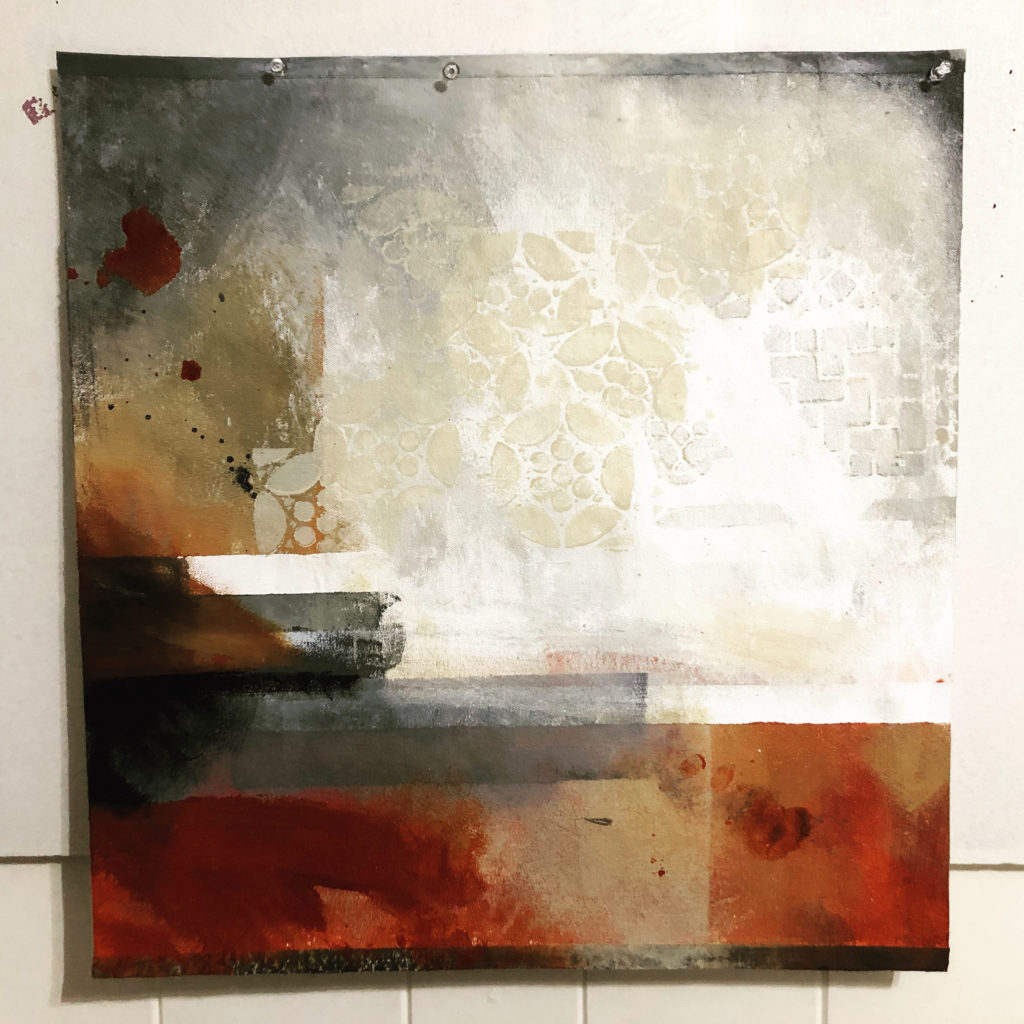 At this point, I posted on Facebook that I liked the palette better than the painting! You can’t go wrong with Quinacridone Gold and Payne’s Gray! 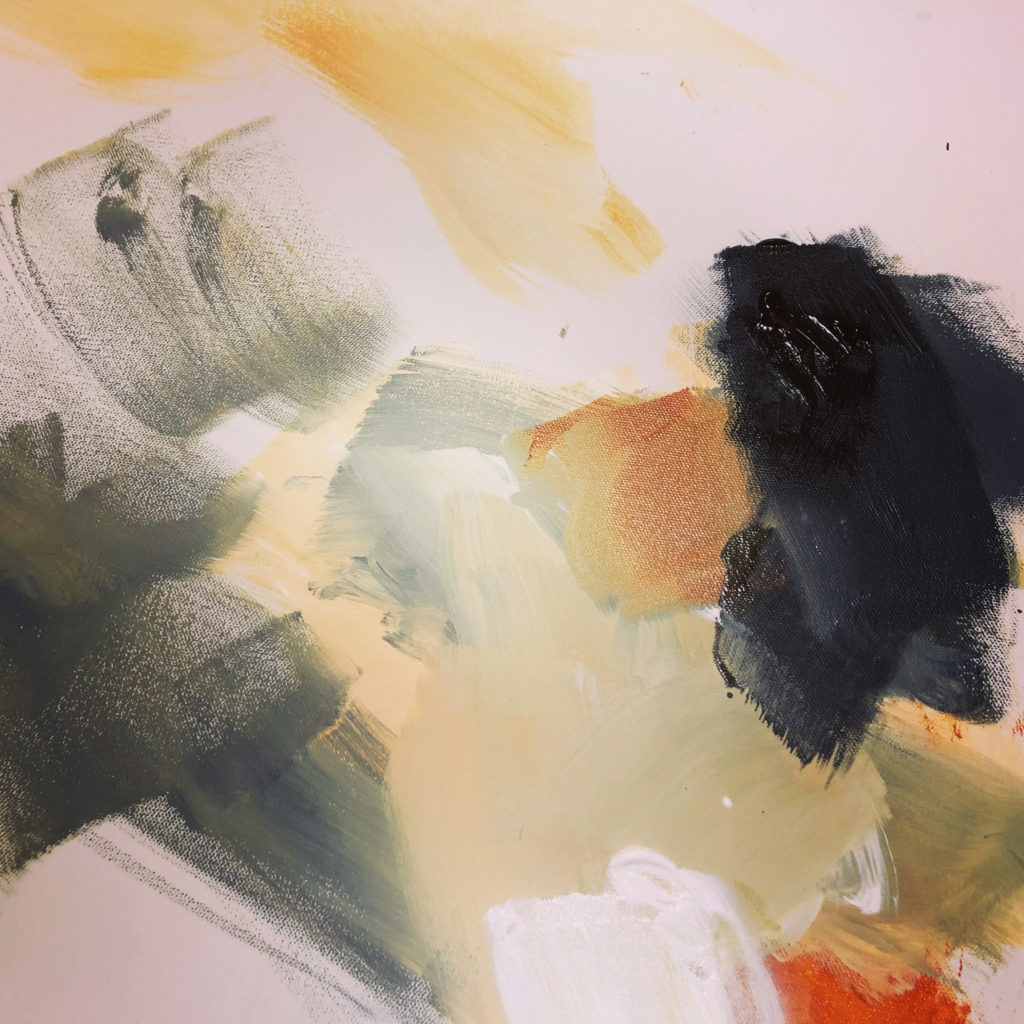 Then the painting got to that stage where things get murky and uncertain – I had imaged that it would be misty and soft, but more geometric shapes seemed to be called for. 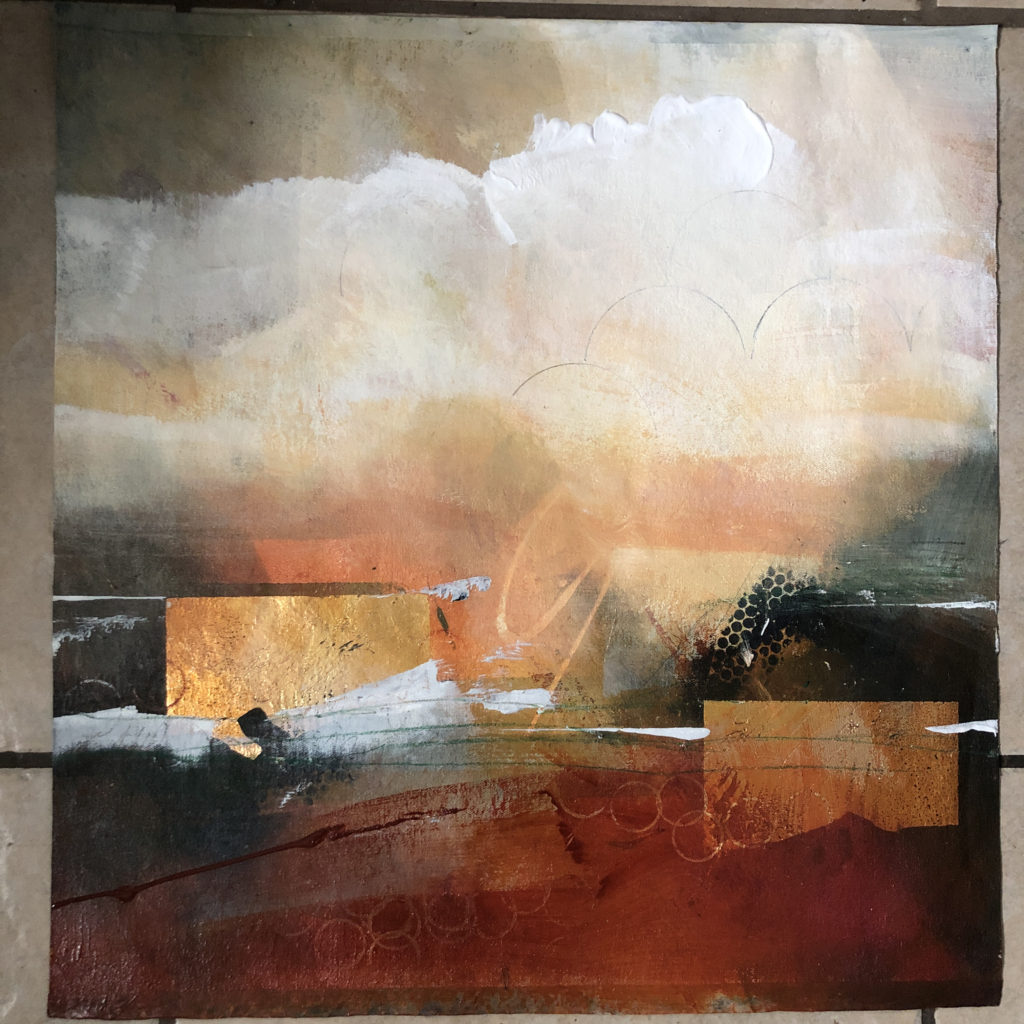 I almost stopped here. The painting was pretty – but that’s ALL it was. There had to be more . . .

Immediately, I knew there need to be a large dark block on the left — a WALL: 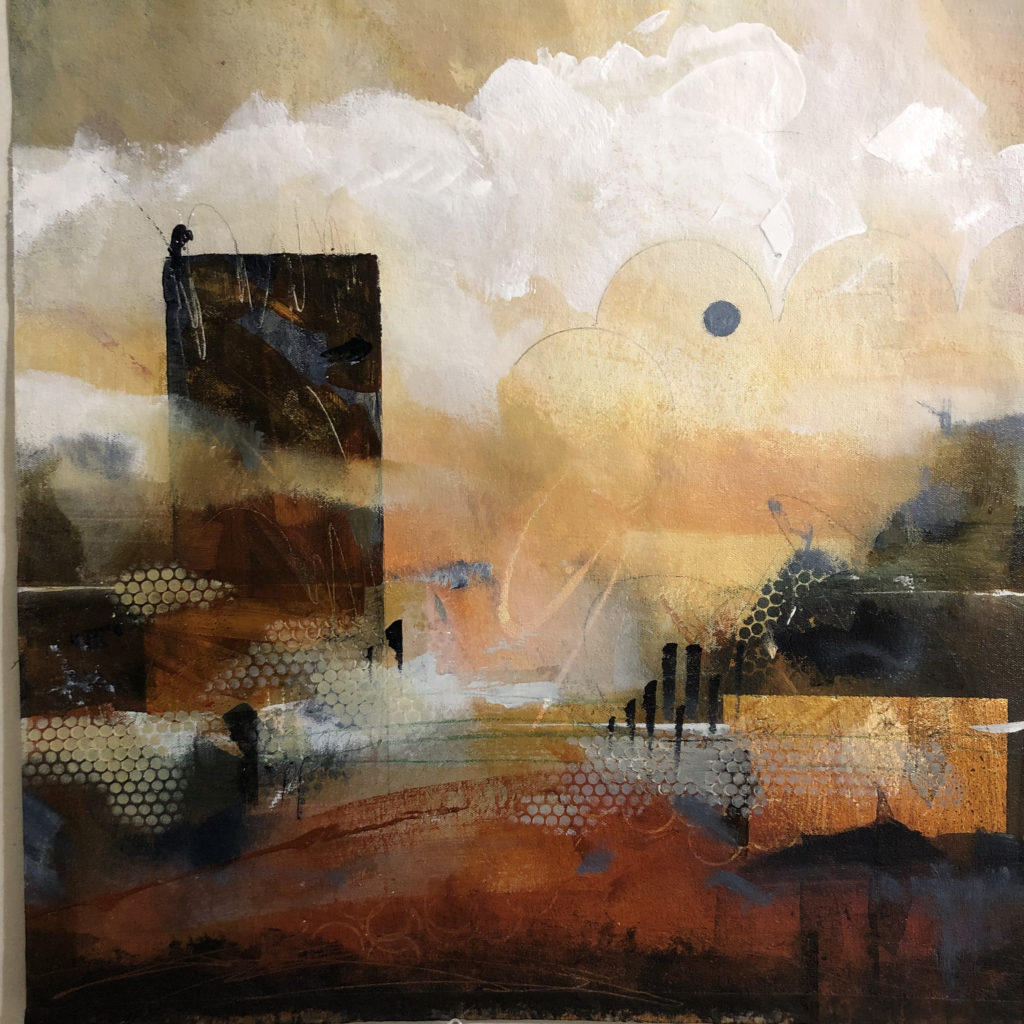 I realized that the painting was becoming the abstract representation of a borderland in turmoil – fences, walls, wire, smoke. Just yesterday I had seen photographs of a bulldozer at a protected butterfly sanctuary on the Mexico border. 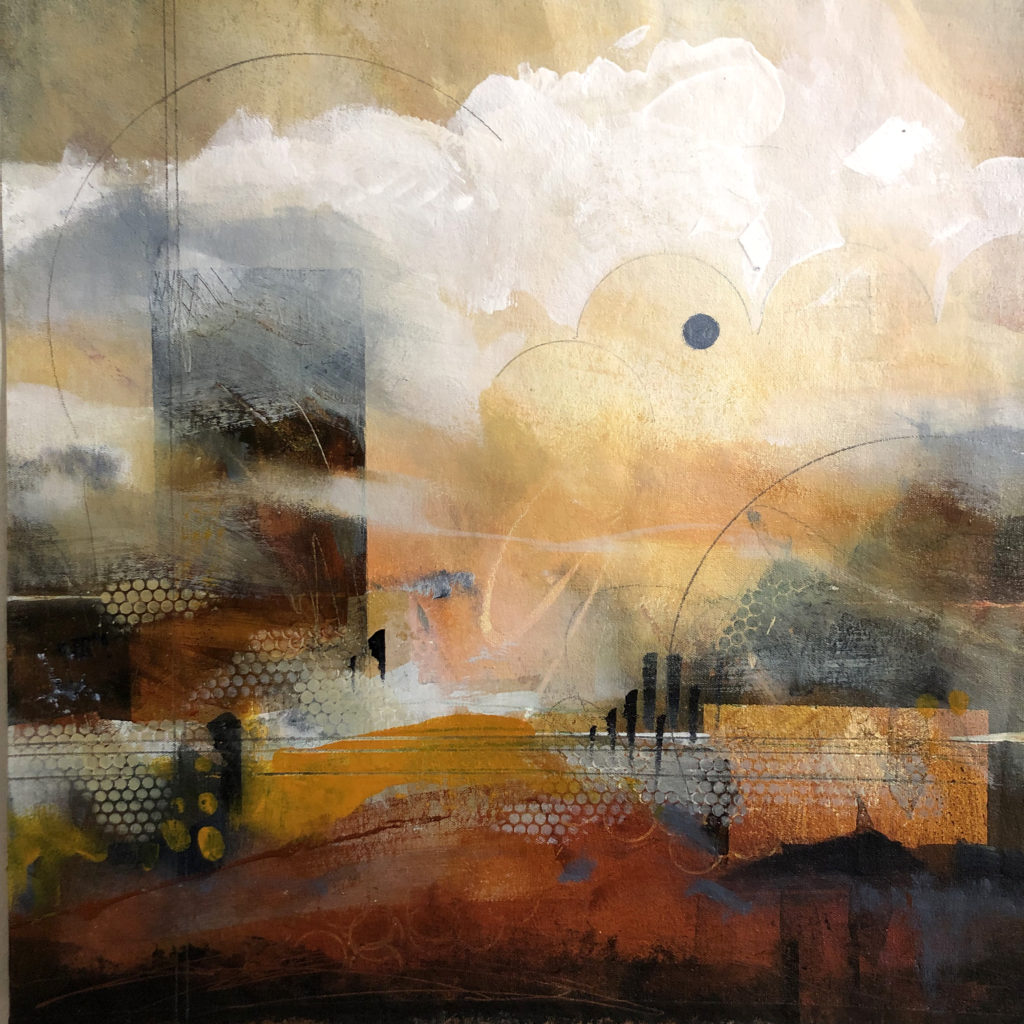 I am so grateful for the intuitive guidance that helped me express the frustration I feel about divisions and conflict. It’s cathartic to paint it through. Every little dab and brushstroke in the finished piece now has new meaning for me.

The next step will be to cut up the painted scrap palette I used, and create a quilt collage on the back side of the canvas. I’ll post a photo for that when it’s done.

Sylvia’s vision for our GAGA group show, A Certain Sense of Her, should play out well at the Coastal Bend Gallery – can’t wait to see all of the quilted-inspired paintings on site! 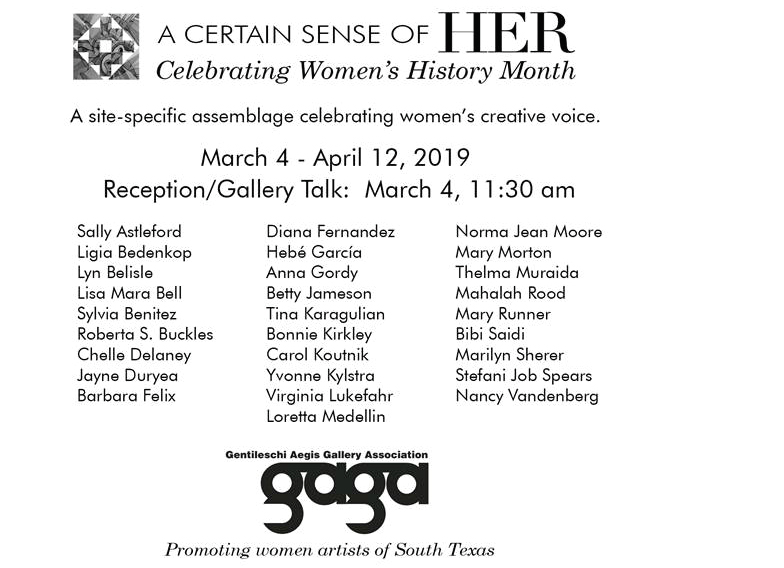 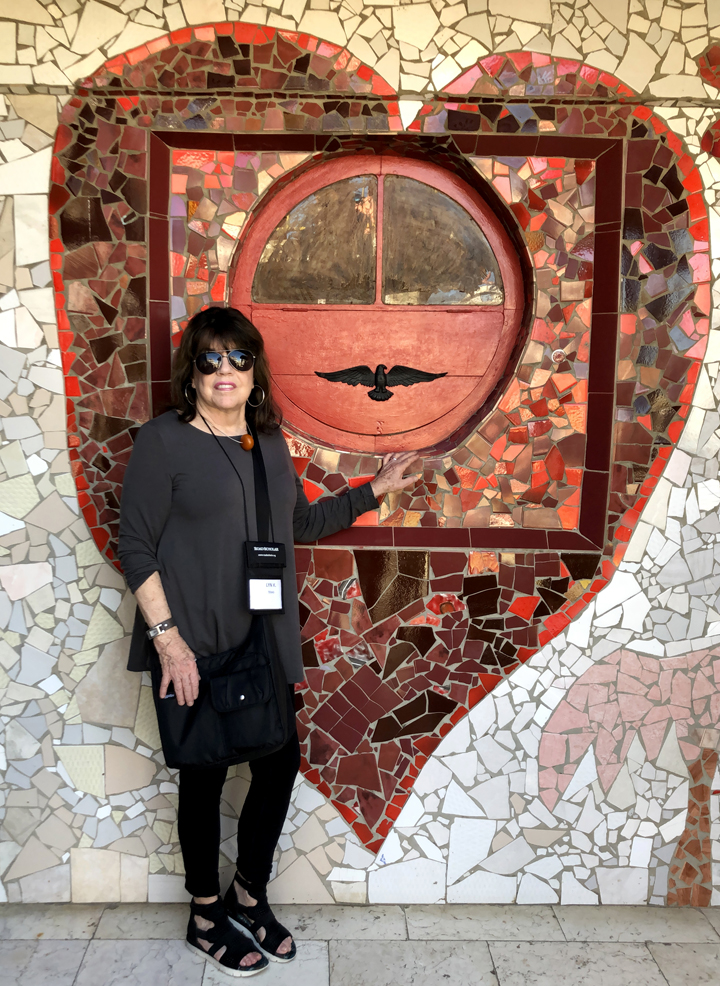 I loved exploring the joy of Cuban artist Jose Rodriguez Fuster‘s mosaic-covered “Fusterlandia”, a home, studio, and community in Havana

Cuba is a land of creativity, contradictions, and complexity. After eight days there, I’m still processing the experience, and probably will for a very long time. (Cuba is a photographer’s dream. To go directly to the photos in my Cuba Journal, take this link.)

Our small group tour included “people to people” interaction with many local artists, entrepreneurs, musicians, ecologists, schoolchildren and more during our travels four areas across the island.

We spent several days in Havana, which is celebrating its 500th birthday this spring. The city is a time capsule of transportation and architecture. Cuba is a country still deeply entrenched in a complex political situation. Nevertheless, innovation and invention are everywhere and the spirit of the Cuban people is inspiring.

On the street near Ernest Hemingway’s house

There are many helpful guides for Americans who want to travel to Cuba, and it’s important to read them before you plan a visit there. For over 50 years Cuba was essentially off limits to Americans thanks to a 1962 trade embargo that made spending money on the island tantamount to treason.

This all changed in 2014, when the Obama administration announced a reestablishment of diplomatic relations with Cuba. However, to quote travel guide Andrew Scott, “This opportunity will not last forever. The influx of foreigners is rapidly transforming Cuba’s economic and social realities. Meanwhile, political uncertainties in the U.S. make it impossible to know if the borders will remain open.”

I am so grateful that I visited Cuba when I did. For artists, it is rich with visual imagery – and Cuban artists are prolific and skilled, particularly in printmaking. I spoke to several of them about their processes and vision. 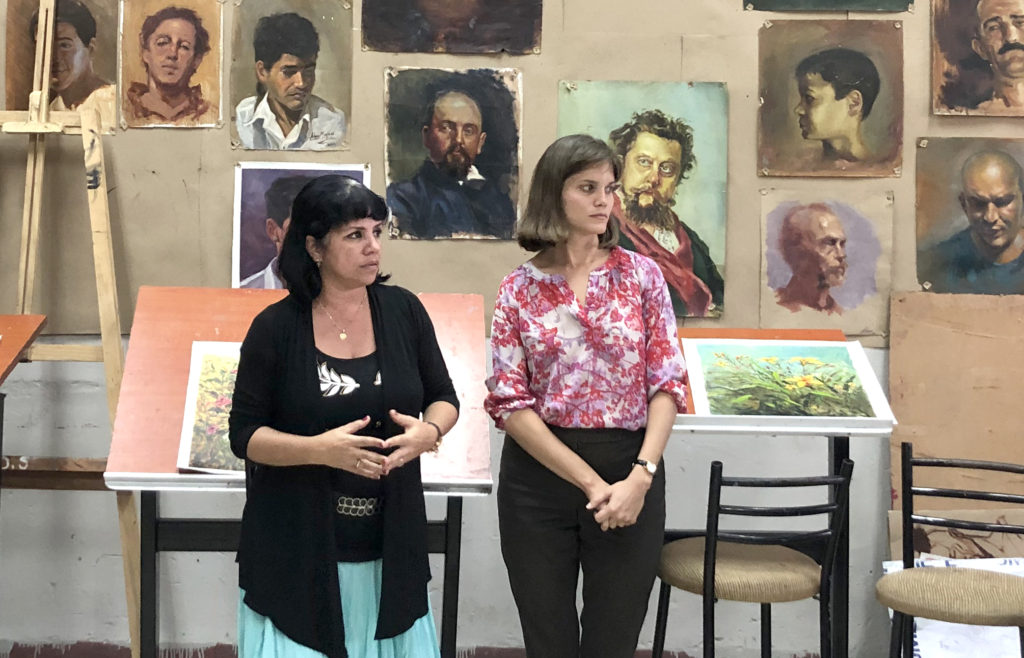 One thing we didn’t talk about was Decreto 349, a new decree by the Cuban government that criminalizes independent artists and places severe restrictions on cultural activity not authorized by the Ministry of Culture. You can read more about that here.

The Internet just become available in Cuba two months ago, and vendors were selling WiFi cards everywhere we went. It is going to be extremely interesting to see what effect that kind of global access produces.

I have a lot more reading to do about Cuba, but in the meantime, the photos from the trip continue to inspire me. Here are some of my favorites, presented in a photojournal on my website. I hope these digital snapshots express all the reasons why it’s easy to fall in love with Cuba and its people. 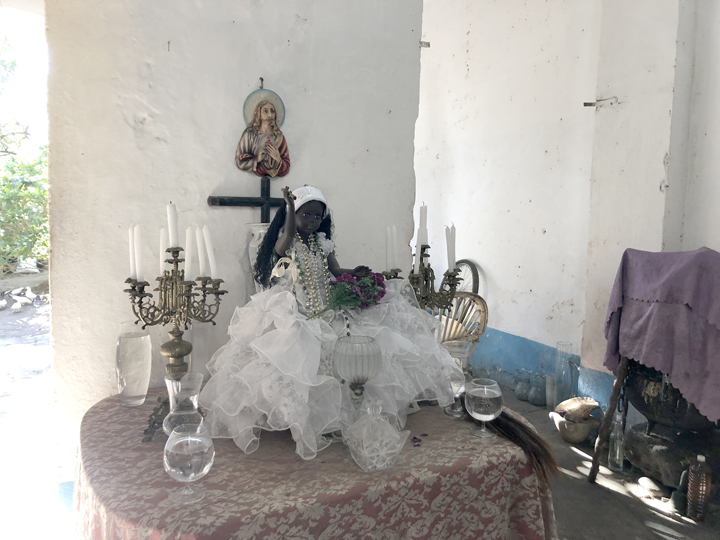