Finding time to work on pieces to submit for juried shows is definitely a luxury these days, but I’m always looking for the spark of an idea that might work for an interesting “Call for Entry.”

So I got an idea last week for  the upcoming Fiber Artists of San Antonio show based on a piece I did for a show at St. Mary’s University in February. It was a standing screen sculpture with silk ribbon pieces on the surface. I wrote about it in a previous blog post. 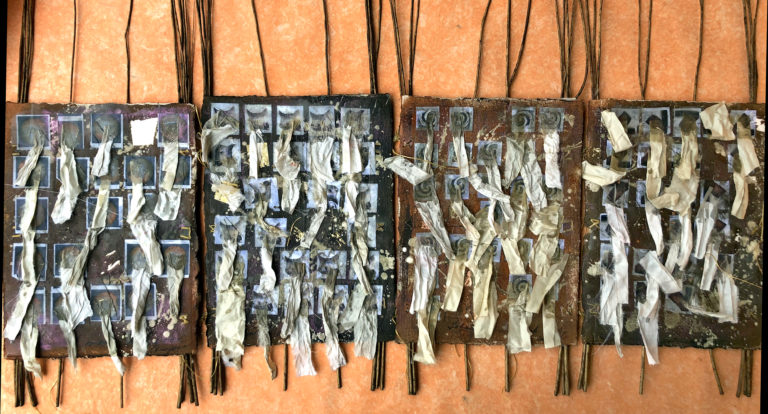 I made a very rough drawing in my sketchbook with tag-shaped objects that might have faces on them to be printed on linen and then attached to a new screen structure. 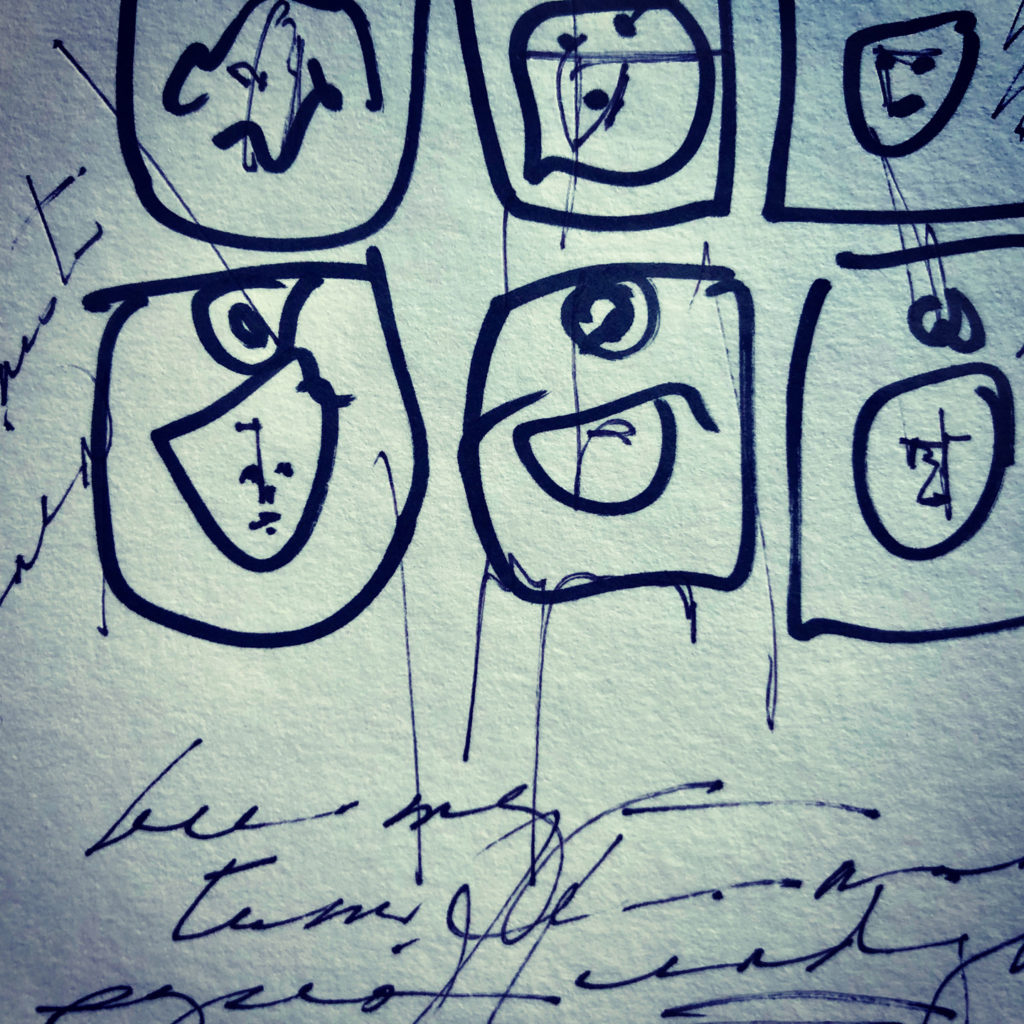 You can see the word “beeswax” under the sketch – honest, that’s what it says. But I wasn’t thinking about encaustic at this point, focusing on fiber instead.

I decided to use the faces in this 1936 photo of children in the Netherlands who were living in poverty – isn’t it haunting? 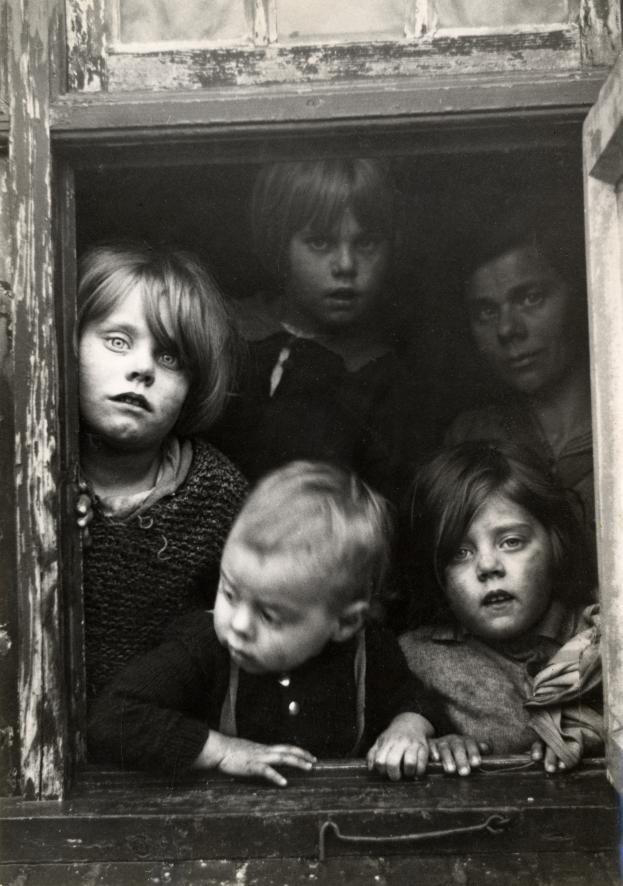 I adhered a piece of linen to some freezer paper that was cut to 8.5 x 11″ and then opened the photo in Photoshop, edited it for a sepia tone, and ran it through my printer. Once the freezer paper was peeled off, I tore two of the photos apart and adhered those to some rice paper. Here they are: 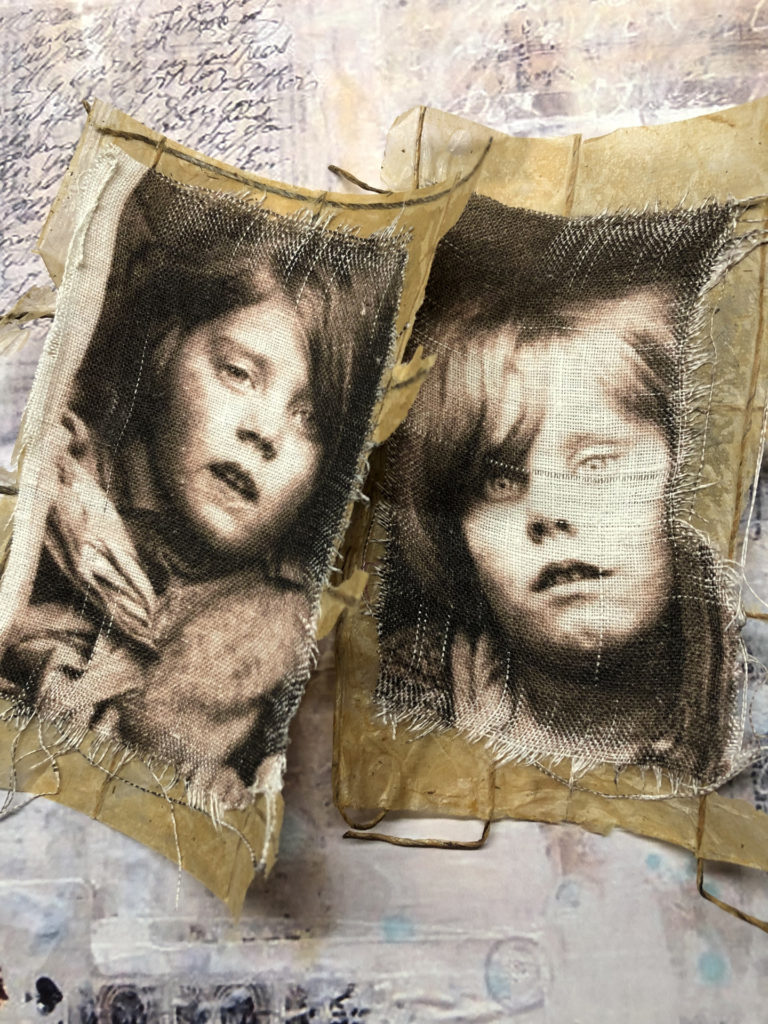 They looked good – and then I got stuck. They really weren’t right for the screen idea – too strong, too something. Days passed. Then I remembered the piece I had just written about, the one at the Museum of Encaustic Art with the faces of young girls working in poor conditions but looking both brave and resigned.

I hadn’t planned on making an encaustic piece from these faces, but coincidentally, the Museum of Encaustic Art in Santa Fe has a current call for entry called Global Warming is Real. All of a sudden, I could visualize these children’s faces looking through a window  onto a world where crops fail, oceans rise, and humans suffer devastation.

In the studio, I built a panel frame and added layers of wax and tissue with words of warning about climate change collaged around the edges. I waxed the linen and rice paper images. When the children’s faces were added, the piece worked as an expression of the theme. I call it “The Last Window.” 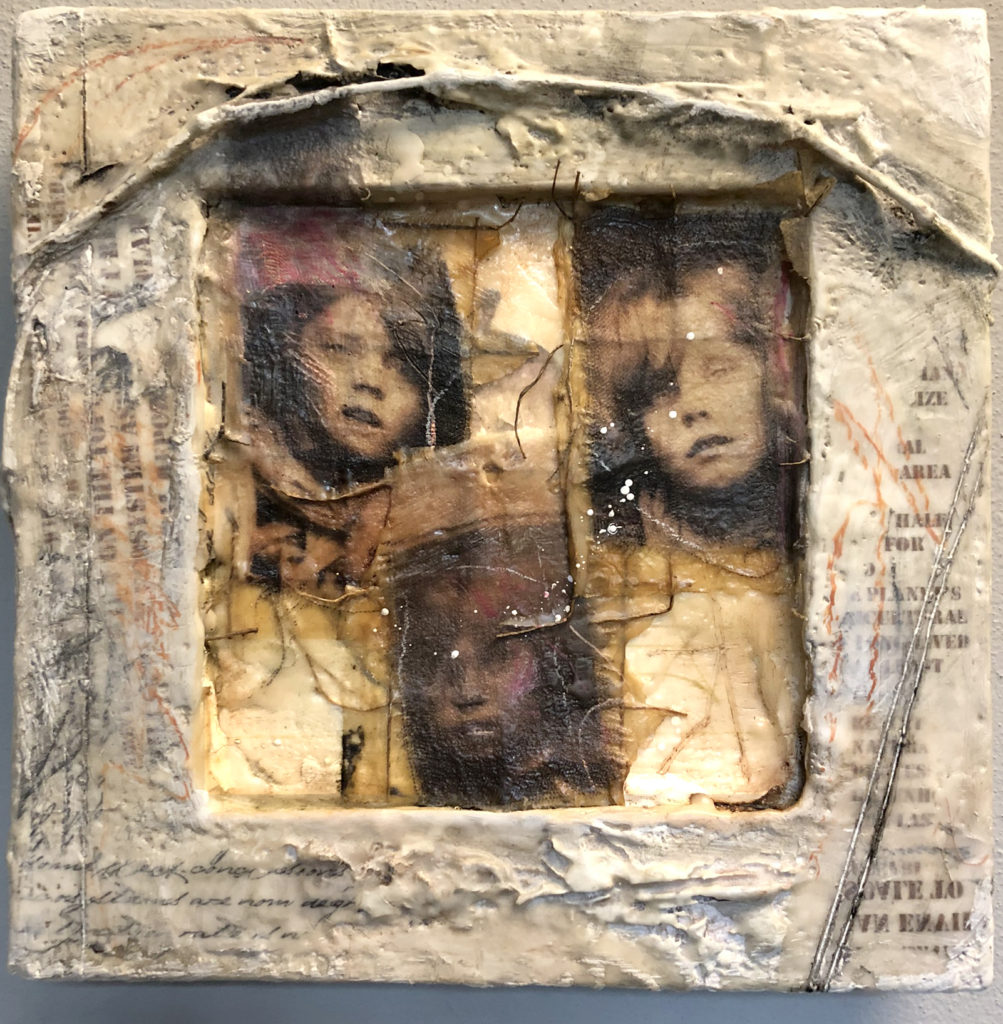 You can see in these details how well the linen works with the beeswax: 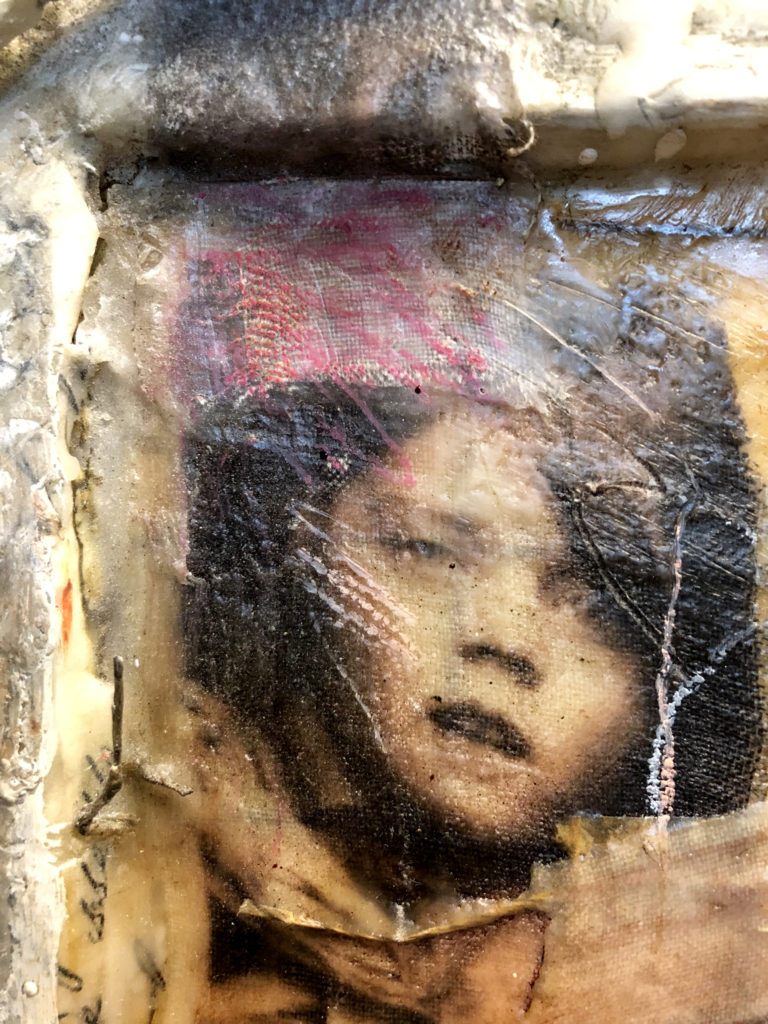 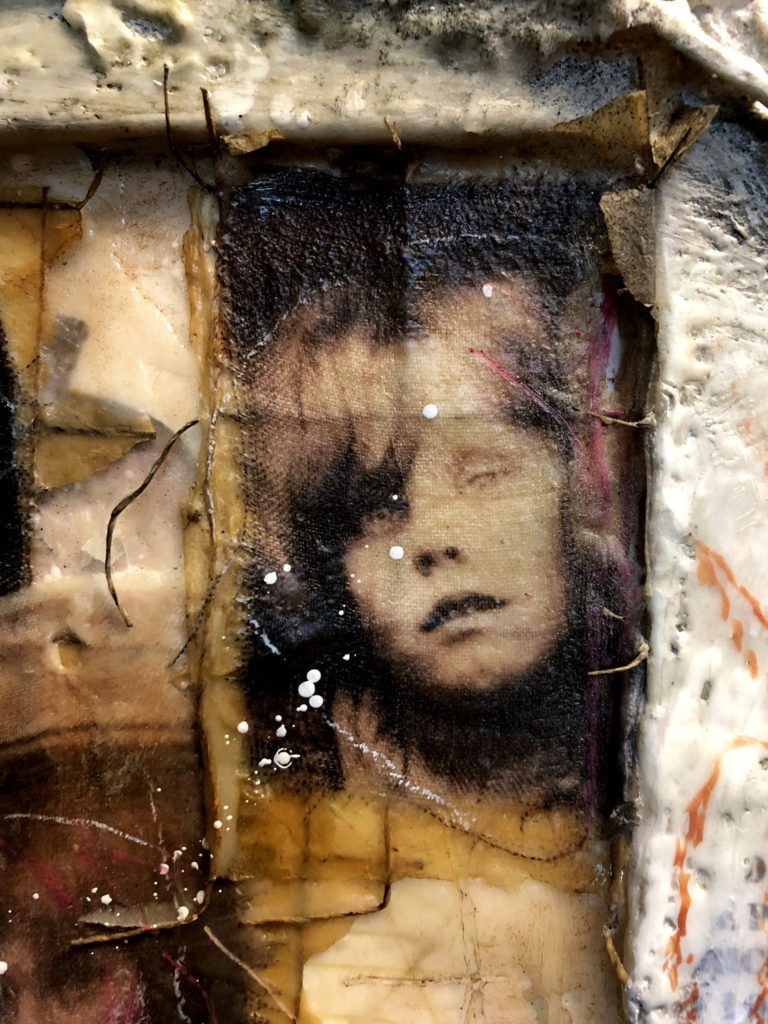 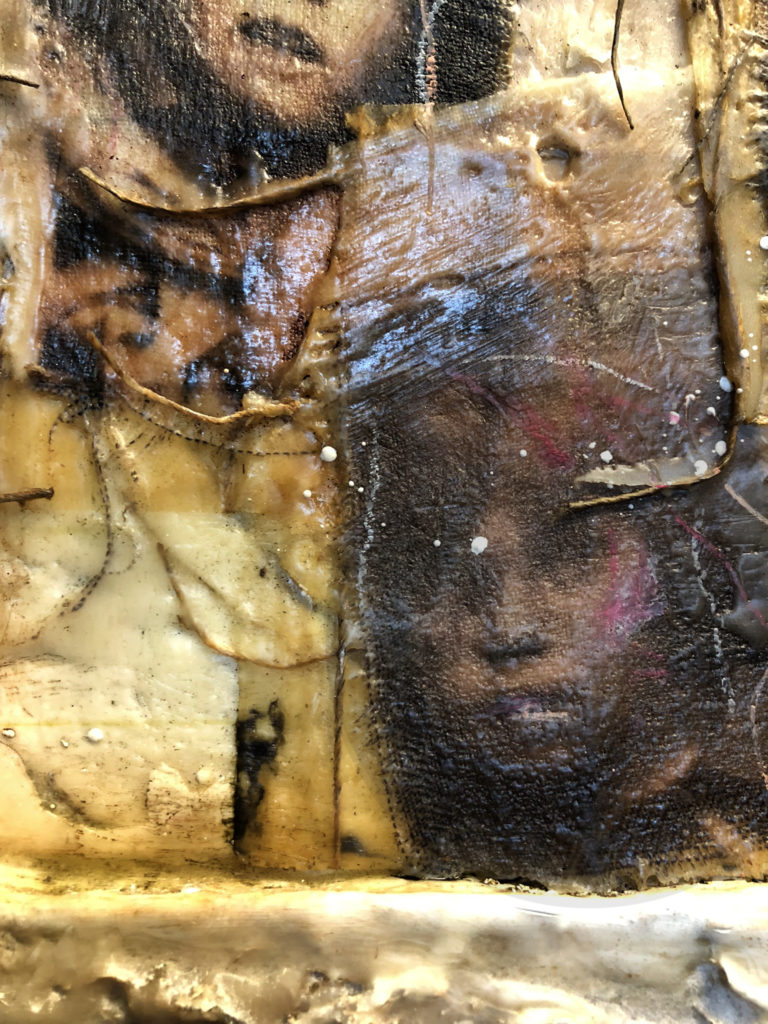 My beloved professor, the late sculptor Phil Evett, once told me that if an idea isn’t working, it’s not about the idea, it’s about where it belongs. In his case, he was talking about a carved head that had sat in his studio for 20 years until he finally found the right piece to attach it to.

In my case, these compelling children’s faces belonged in a mixed media encaustic and fiber collage about a critical environmental concern. It just took me a while to figure it out.

So let’s keep making those sketches and creating small shards of ideas – they will let you know where they belong! Oh, yeah, and I’ll let you know if “The Last Window” is accepted for the exhibit! (The deadline for submitting is tomorrow).

Thanks for reading SHARDS today.

13 thoughts on “From Spark to Finish”