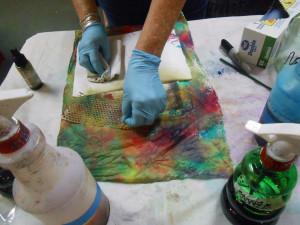 In my last post, I said that I was excited about the upcoming Goddess Banner Workshop because it was something new for me. The idea was a combination of influences – Joanna Powell Colbert’s Gaian Soul Retreat, of course, and also the small-space dyeing techniques that Rosemary Uchniat teaches. And personally, I’ve felt an urge to explore the healing aspects of iconic feminine energy and consciousness, aka just plain ol’ being kind and being nurturing, both to ourselves and the planet we live on. Soooo – it was a joy to work with the eight women who participated in yesterday’s Goddess Banner workshop.

Before you look at the video, you should know that every person worked with the exact same image, an anonymous early 20th century photograph (1915) from the Flickr Commons archives. But each face look very different in the individual completed banners. We all remarked on this – each of us brings ourselves into the process and transforms our images unconsciously and almost magically. I’ll be offering this workshop again soon. Thanks to the participants who helped me bring this idea to reality in yesterday’s class. Wonderful banners all!!