“Everything in nature bespeaks the mother. The sun is the mother of earth and gives it its nourishment of heart; it never leaves the universe at night until it has put the earth to sleep to the song of the sea and the hymn of birds and brooks.” ~Kahlil Gibran

Yesterday’s Goddess Banner/Prayer Flag workshop was a different kind of Mothers Day celebration. We created personal statements in fiber with dyeing, surface design, phototransfer, handwritten quotes and personal iconography. It was a celebration of the idea of nurturing the spirit of Mother Earth – and we had a really fantastic time!

OK, so I don’t usually use glitter in my workshops – too darn frivolous, right? – not this time! We glittered our banners, our gloves, our faces (inadvertently) – it looked like a Tinkerbell convention. And every single work was beautiful and heartfelt.

Even though some of us had kids who were far away, the Studio was a real place of creative belonging yesterday. What an experience! Take a look at our video:

The Studio was awash in dye this weekend, first with Rosemary Uchniat’s fantastic half-day Small Space Dyeing workshop on Saturday, and then my Goddess Banner workshop on Sunday afternoon. Everyone was caught red-handed having fun – and blue-handed, and green-handed . . .take a look at the video!

Both classes will be repeated in case you want to join in. Rosemary’s second Small-Space Dyeing class is October 17th from 1-5. The first one sold out instantly. And my next Goddess Banner workshop is coming right up on Sunday, August 16th from 2-5. 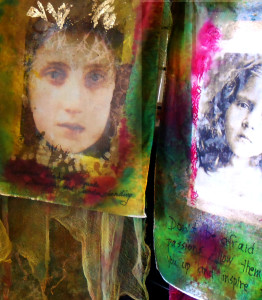 Now about those Goddess Banners, this was a special small class that was scheduled for a guest from Houston who wanted to take both Rosemary’s class and mine the same weekend. There were four of us, and it was great to be able to work alongside the participants. I had a blast! We transferred images, dyed cheesecloth, created symbols and words of inspiration, and put it all together in the most remarkable way! I just love this project – and it’s three hours, start to finish.

One of my favorite fiber artists, Linda Rael, was in our group – that made it even more fun. She has a great idea for a series of banners, but I’ll let her tell you about it if she actually does it. Hope so! Take a look at the video, and then consider signing up for the workshop on August 16th – you won’t regret it! It’s to dye for. Sorry.