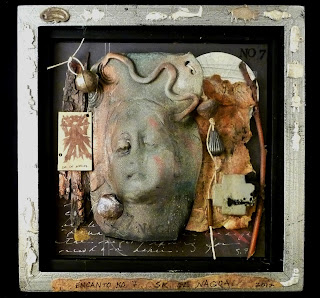 First small construction in a new series based on Otomi cutout figure books – these are charms (encantos) based on the properties in the spirits represented in the cutouts. This piece is an encanto for the Nagual figure. Naguales are humans who can turn themselves into birdlike creatures. The Nagual often flies through the night, looking for newborn babies. Blood sucked from babies and weakened individuals constitute the Nagual’s diet. Often believed to be distant in-laws or family members attacking their kin, Naguales are viewed as being negative to family reproduction.

Notes from the Missouri Museum of Anthropology
The Otomi Indians live in San Pablito, a city in the east-central Mexican plateau of Sierra de Puebla. Traditionally, the Otomi have relied on agriculture as their means of survival. As a result, many of their religious beliefs and practices involve the spirits found in seeds, crop plants, and ecological forces such as rain and sun. These spirits embody certain qualities that not only must be respected but also are used by the Otomi to pass on societal values.
Intricate paper cutouts are made of these spirits by folding a piece of amate paper in half, rendering a symmetrical figurine. Amate is made by stripping the inner bark from certain trees, then processing it into paper. The figurines are then used by religious leaders in rituals and offerings performed to control the spirits represented in the cutouts. The rituals are usually performed to cure and prevent disease or to ensure crop fertility and the health of domestic animals. More importantly, the cutouts show how the Otomi view the world and their place within it.
This exhibit presents examples of different varieties of Otomi cutout figurines from the Museum’s ethnographic collections. These items, which date to the late 1970s, were collected and donated by Dr. Alan R. Sandstrom, coordinator of the Indiana University/Purdue University anthropology program. Much of the content of this online exhibit is based on Dr. Sandstrom’s research and writings about the Otomi.
Kinship Figures: The Otomi depend on their kin groups for survival; thus kinship is an important part of Otomi life. A variety of cutout figurines reflects the importance of familial relationships.
Fertility Figures: Fertility and success of yearly crops are key to Otomi survival. Figurines representing seed spirits show the importance of agriculture as well as the benefits that come from nature.
Nature Figures: Figurines in this category represent the spirits of the forces of nature. As the Otomi rely on crop success for survival, these spirits remind the Otomi that their livelihood is at the mercy of nature.
Anti-Culture Figures: Figurines in the Anti-Culture category represent spirits that go against the basic values and beliefs of Otomi culture.
Intermediary Figures: The figurines in this category represent spirits that act as messengers between the human and spirit worlds.

From my own book of Otomi Cutouts: 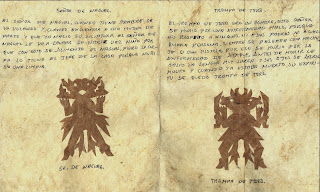 Thanks to all who came to the Open Studio event this afternoon. It exceeded our hopes and was more fun that any one of us could have had showing by ourselves. One man who attended said that the synthesis of our various kinds of work was a perfect match – I agree, and am so happy to have shared the afternoon with women friends whose art I have admired for a very long time! Let’s do it again 🙂

. . . .and I am nervous. Fortunately, my friend Jennifer just send me a video about the power of words, so I’ll take this lesson to heart and think positively. This is a wonderful little clip:

There’s nothing like unloading the kiln to start a flood of new inspirations. As I was stacking pieces, a small face and a little tile said, “Choose us!” It was almost that clear – and always right on. There was a small canvas nearby that I had been experimenting with, so I arranged the pieces on it and voila! A mini-Klimt, a new idea for a series of small framed wall pieces. It will need extending and expanding with consistent color and texture, but not much These would be perfect for my show at LaVida Gallery in June. Dang, art is fun when you listen to it. 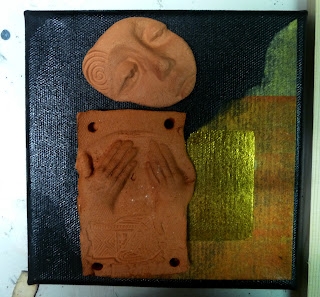 Pieces from the kiln (below) – some for open studio on Sunday 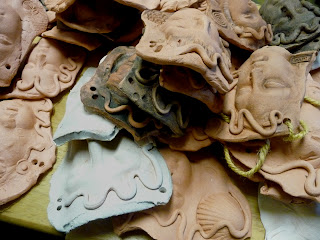 This will be fun. I’m having another Open Studio on Sunday the 29th It’s a way to get myself to work on the small projects that I love like magnetic pins and collages, votive cards and shards. The best news is that two talented friends are joining me, JJ Martin with her photography and Jan Longfellow with her jewelry designs. I am so lucky! This is the last official day of Fiesta San Antonio so I hope no one is too pooped out to come by : 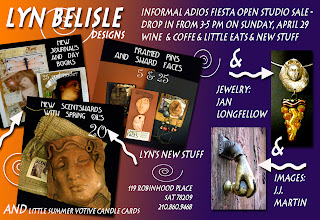 What a thrill! Not only were two pieces accepted into this 100th anniversary of the San Antonio Art League juried show, but one sold and the other got an award. I knew about the award, but when I walked in the gallery, I saw that the diptych had a red dot on it – woohoo. Here are some photos from the event. There sure is a lot of gray hair there (and a lot of wonderful artists whose work I’ve admired for years). It was a very good afternoon.

Inspire Community Art Center is a place that’s near and dear to my heart. Today was the annual fund-raising event, Blossoms and Blooms, which funds Inspire’s outreach art programs to places like Haven for Hope and Alpha Home. I was one of the committee members, and they were a hard-working bunch of artists! There were art activity booths for the children, live music and even some exotic fortune-tellers.This little video shows some of the fun, art and food.

This is more of a complex experimental sketch than a finished piece, although I’ll probably include it in the May show at La Vida. I like the idea of “grave shards” in which a face from a cemetery is re-imagined into a new myth or goddess or artifact or fragment. Combining the clay and paper is still a challenge because of the differences in texture and substance, but I love the way they look together. 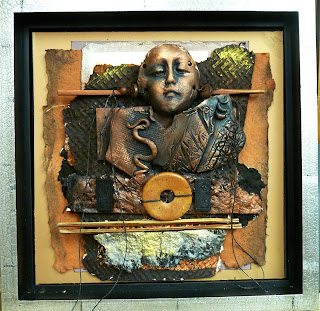 With everything else that has been going on, I haven’t had a good day’s work on e-reader covers in a while. But today I got to work in the studio, finished and posted three (!) new ones to my Etsy shop. I like them all – perhaps “Avril” is my favorite, but that keeps changing.  Here they are. Tomorrow I’m going to make some little “Re-Coverie” journals using each one of these: 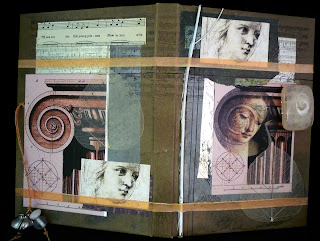 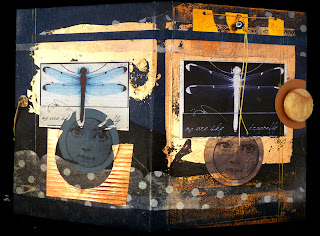 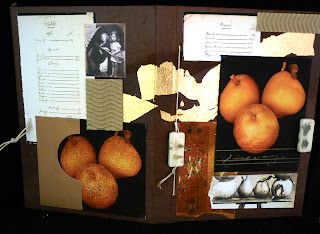